Home > Blog > Thai Pottery Over Time: Learning from the Archives

Thai Pottery Over Time: Learning from the Archives

This blog post was written by Supamas Snitwongse in fulfillment of a course assignment in Dr. Adrienne Pine's Craft of Anthropology I course (ANTH-601).

Dr. Charles Nelson Spinks donated more than 1,000 books to the American University, most of which deals with ceramics from Japan and South East Asia. Dr. Spinks’s interest in book collecting began after he finished with his graduate work at Stanford and went to Tokyo to teach English and literature at the Tokyo University of Commerce. Here, I analyze one of his collected articles from 1962 on a the topic of ceramic production in Thailand.

The selected document is an article from Bangkok World dated in February 25th, 1962, describing the production of rooster bowls from SP factory, located in Songwat Road (part of the Chinatown district in Bangkok.) The photograph at the top left of the article shows a manufacturing process that combines factory production with skilled craftsmanship to mold the bowl. 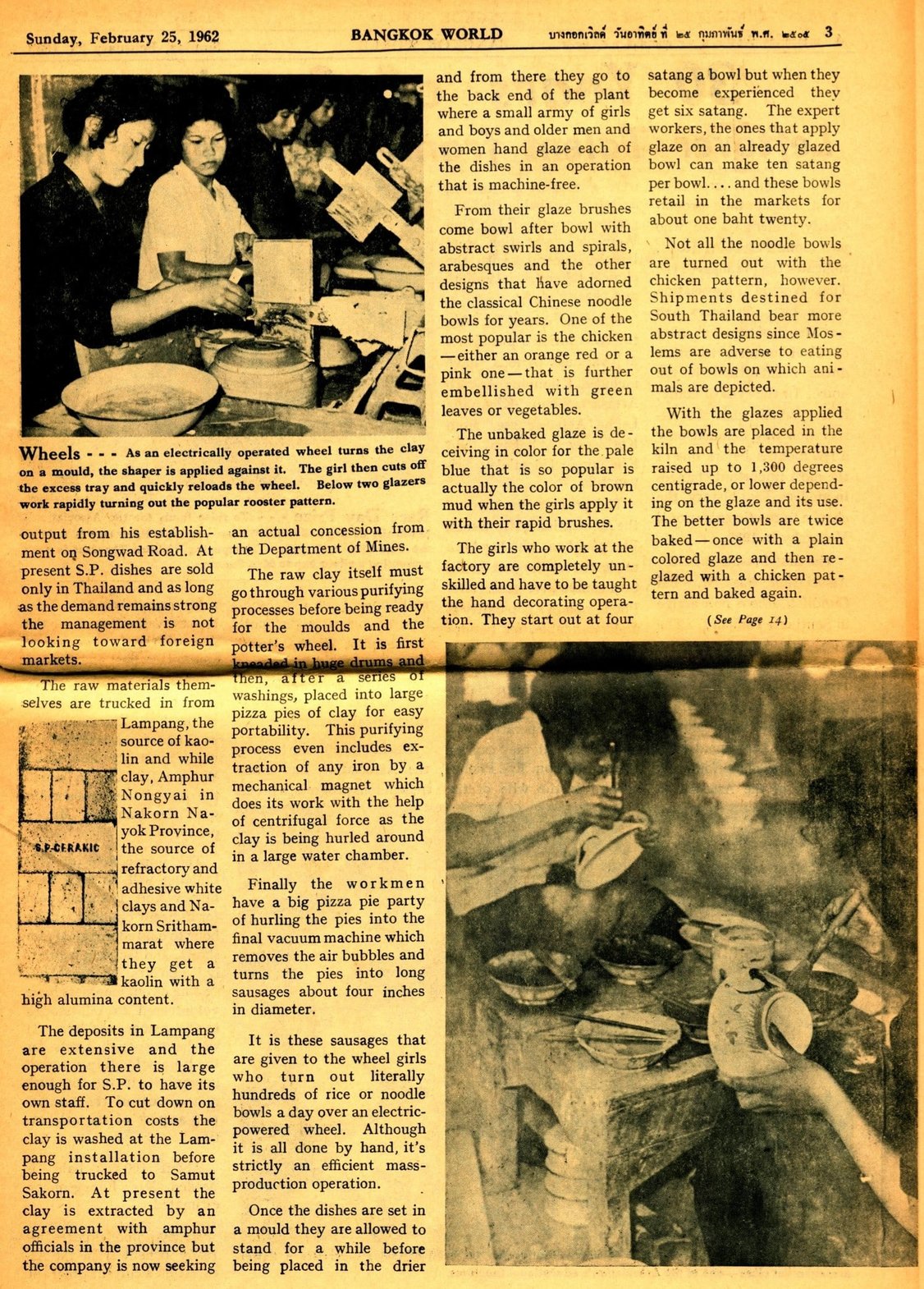 Today, it is a common understanding among Thais that the rooster bowl is a product of Lampang province. Dr. Spinks’ article traces the history of the rooster bowl further back from the common, mass-produced version we see today in noodle stands in Thailand.

According to a study from the Lampang Ministry of Culture, the first rooster bowls originated in China, made by the Hakka community around the Guangdong Province. Designs were drawn onto white bowls. Each bowl depicts a black-tailed rooster with a red neck and trunk walking on green grass. Red or purple peonies and green banana leaves were drawn on the other side of the bowl. Peonies symbolize wealth and high social status. The banana leaves signify fortune and luck. Like many Chinese decorations, the drawings on the bowl represent the goodness in life. The choice of drawing a rooster instead of a hen speaks to a cultural male preference. The bowl used to be a popular export good from Guangdong to Thailand for its cheap price and durability.

In 1937, the open trading policy of King Rama II with China drew many Chinese merchants to move to Siam to start their own businesses. Chinese immigration to Thailand brought skilled rooster bowl makers from China to Bangkok. As the article in Dr. Spinks’s collection notes, rooster bowl factories subsequently began to pop up in Bangkok and surrounding areas. Later on, many pottery factories decided to relocate to Lampang. Chinese investors found Lampang to be an ideal location because of the abundance of pure white clay, the raw material necessary for the production of rooster bowls. To this day, rooster bowl production is very important source of revenue in the Lampang district.

By 1960, the ceramic pottery market was very competitive in Thailand, and many rooster bowl factories shifted to different products, such as Japanese-style pottery or whatever else was trendy. Other rooster bowl factories shifted to cheaper production modes to cut costs. For example, the traditional bowl needed to be heated twice. It was first baked to set the clay. After the bowl cooled down, the artisan would paint the rooster pattern, and the bowl would be heated a second time to seal the color coating. Today, factories only heat the bowl once during the production process, which results in lower color quality.

Nowadays, it would be unusual to see a craftsperson operate the molding machine as in the article’s illustration, since most factories are fully machine-operated. The painting is still done by hand, but with far less skill than was used in the production of earlier versions of the bowls.

Because they are now scarce, there are today many passionate rooster bowl collectors who seek the “authentic” older bowl. The look at the shape of the bowl—the bottom of the original should be a little bit imperfect and rectangular because the base of the mold that was previously used was rectangular. The colors of the rooster on collectable bowls should only be red and black, while newer rooster bowls have additional colors, such as pink or blue.

These passionate rooster bowl collectors have helped bring attention to Lampang province, with the support of the factory owners.

This is one of many cases in which the profit-motivated demand for quantity won over quality and craftsmanship. But the rooster bowl continues to survive and thrive in today’s society—even as a thoroughly changed object, both materially and in terms of cultural significance—through creative adaptations to market pressures.