The Dream of the Women: AU's Female Donors

The Woman's Guild wasn't the only way for women to get involved with AU's founding, nor was Mary Graydon AU's only noteworthy female donor.

Women served on AU's Board of Trustees, donated funds and objects for specific projects, and campaigned to bring their political and moral visions to AU. 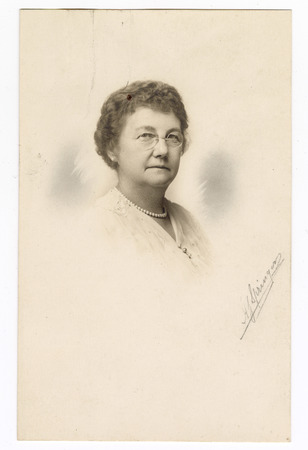 Portrait of Sarah B. Cochran, member of AU's Board of Trustees from 1915-1929 and a prominent philanthropist who supported women's suffrage as well as Methodist institutions such as AU 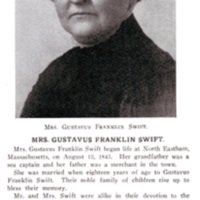 A dedication from the January 1923 issue of the Courier to Mrs. Gustavus Franklin Swift, a well-known philanthropist and an early donor to AU 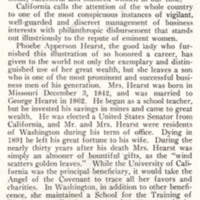 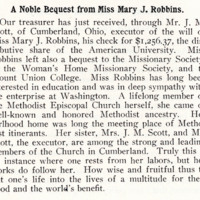 1909 Courier bequest notice for Miss Mary J. Robbins. These notices, common to the Courier, often hint at what led donors to leave money to AU—in this case, Miss Robbins' Methodist faith is apparent. 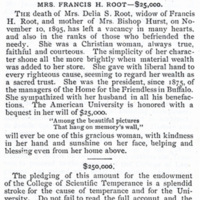 1895 Courier bequest notice for Mrs. Francis H. Root, whose description hints at Christian convictions and an interest in charity 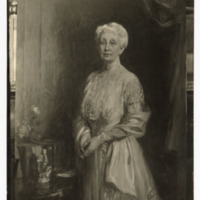 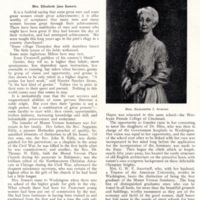 1918 Courier article on Somers, discussing her upbringing, her commitment to women's education, and her vision for Mount Vernon Seminary 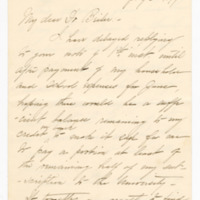 Letter from Somers to Samuel L. Beiler of AU in which Somers describes her precarious finances and inability to donate immediately. Somers' situation indicates that not all donors were abundantly wealthy and may have donated simply on principle. 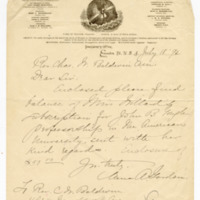 Letter from Anna Adams Gordon that accompanied a $50 professorship donation to AU from Frances Willard, President of the Woman's Christian Temperance Union and well-known reformer 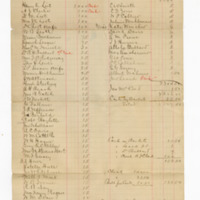 List of subscribers to AU's West Virginia Endowment Fund as of 1899, including many women's names among the donors 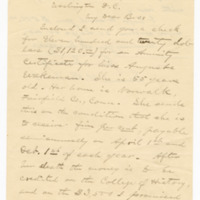 Madame Mountford and the Mountford-Mamreov Museum

Among AU's early donors, few stand out as uniquely as Madame Lydia M. Von Finkelstein Mountford, a high-profile benefactress who donated her collection of Biblical and Palestinian artifacts, worth an estimated $50,000, to AU. In addition to her regular lecture tours throughout the U.S., during which she would discuss her interpretations of the Bible and her life in Palestine, Mountford also curated the Mountford-Mamreov Museum Illustrating Bible Life and Customs in AU's College of History, now Hurst Hall. 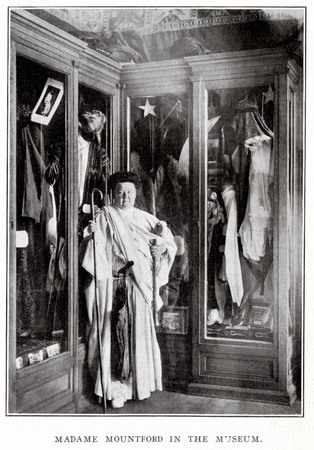 1909 photo of Madame Mountford in her museum, dressed in one of her Biblical costumes 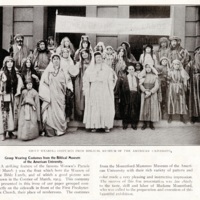 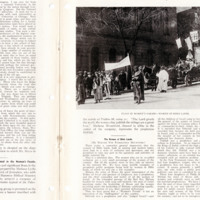 Additional photo of Mountford's float in the Woman Suffrage Procession, as well as an article from Mountford arguing for women's suffrage on the basis of Biblical teachings about women and women's life in the "Bible Lands" 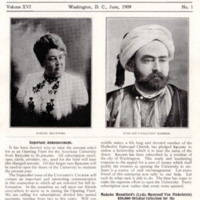 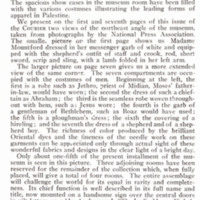 December 1909 Courier article about the development of the Mountford-Mamreov Museum. The article mentions that Mountford herself arranged the museum collection. 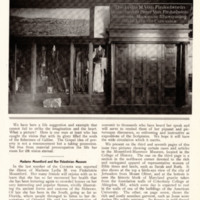 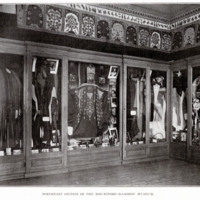 Additional photo of the Mountford-Mamreov Museum's northeast section, printed in the Courier in December 1909

The College of Scientific Temperance

Although the temperance movement doesn't inspire quite the same respect today as the women's suffrage movement, many of the most important women's political action groups of the 19th century, such as the Woman's Christian Temperance Union, campaigned against the influence of alcohol.

These campaigns reached AU as part of the whirlwind of hopeful activity that surrounded administrators' early efforts to fill out the university's campus. Many proposed schools and programs would never come to fruition, among them the College of Scientific Temperance. Funded through an endowment provided by the Temperance Educational Association, the College would have provided instruction and encouraged research on alcohol, intoxication, and physiology.

No one fought harder for the College of Scientific Temperance than Mary Hunt, a prominent temperance education activist. Her writings speak to her commitment to her cause. 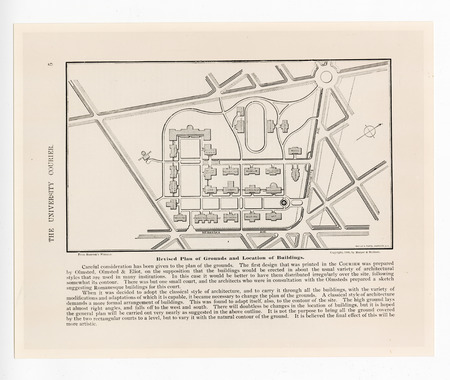 Early plan of grounds including the College of Scientific Temperance (1896). 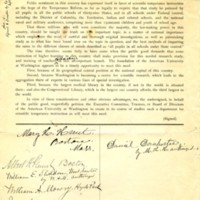 September 1894 petition to AU to create a department for scientific temperance instruction, with Mary Hunt as the first signatory 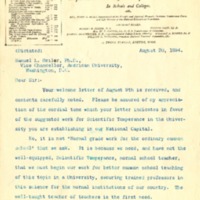 Lengthy letter from Mary Hunt to AU's Samuel L. Beiler regarding the importance of temperance education and the religious aspect thereof, 20 August 1894 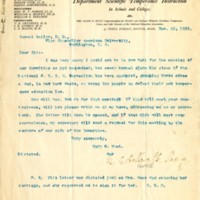 Letter from Mary Hunt to Samuel L. Beiler in which she mentions attending the National WCTU Convention and speaking three times a day in New York on behalf of temperance education, November 21, 1895 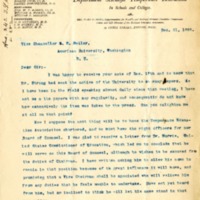 Letter from Mary Hunt to Samuel L. Beiler in which she discusses the possibility of obtaining a charter from Congress for a Scientific Temperance College, December 21, 1895 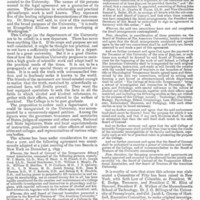 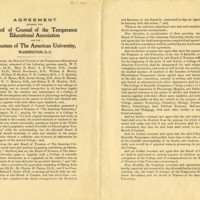 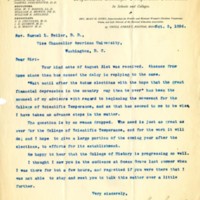 Letter from Mary Hunt to Samuel L. Beiler, in which she states that she is tabling the issue of the College of Scientific Temperance owing to the nationwide financial depression, but that “the question is by no means dropped,” October 5, 1896

← AU's Woman’s Guild: Inspired Collaborators
How to Do Archival Research →
The Dream of the Women: AU's Female Donors